As was feared, GDP down 2.7% in this 3rd quarter 2011 from the previous, which represents a 0.3% year-to-year growth, according to the latest figures of the monetary aggregates published by the Fed Thursday evening, confirming my previous analysis,
Figure 1:

The present crisis is the same that the Lehman Brothers bankruptcy.
Indeed, Americans increase their precautionary savings (M2-M1) because they fear that their situation is deteriorating in the near future because of the consequences of the euro crisis.
Plus (+) saving is less money spent, i.e. less demand and less supply.

Americans increased their savings to… $ 340 billion since the 1st June! At 1st August, it reached 7,400 billion, record high,
Figure 2:

M2-M1 increases to 7.6% year-on-year. It rises above the critical stage of 7.0%. Beyond, growth is negative in concordance with my law on the free money supply,
Figure 3:

The situation is atypical with declining GDP and rising inflation that reached 1.8% in July, as measured by the CPI:LFE (Consumer Price Index for All Urban Consumers: All Items Less Food & Energy)
Figure 4: 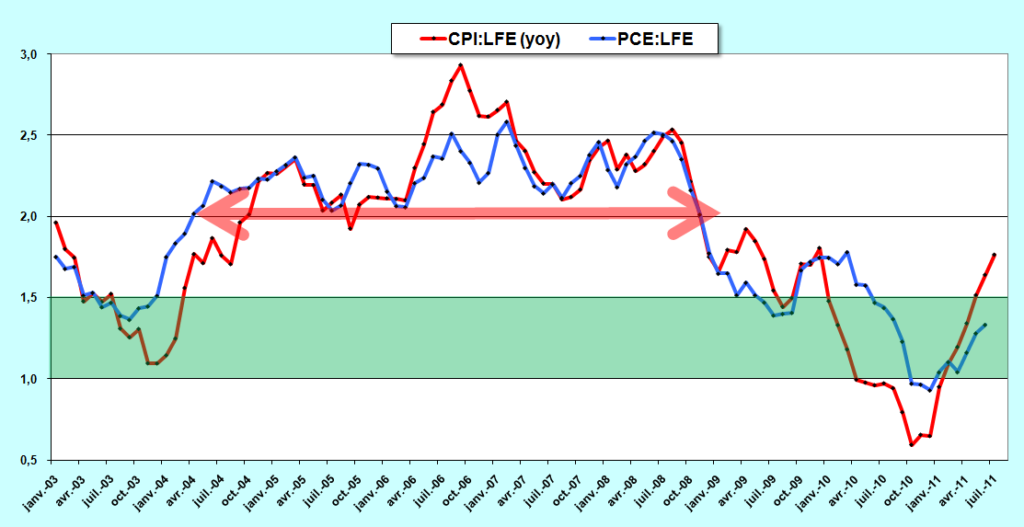 The decline in GDP is reflected in the euro zone which cannot support it. Under-capitalization (or over-debt) of big banks too big to fail will cause an uncontrollable and lethal fall of dominoes in the near future…